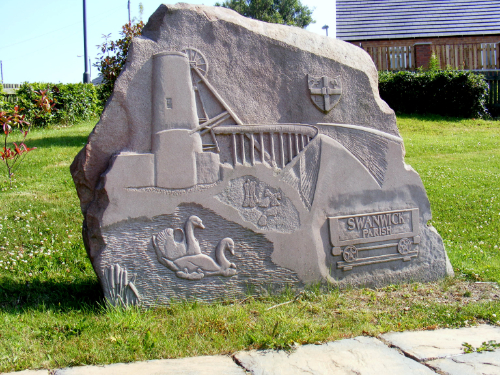 The village of Swanwick in Derbyshire is situated between the towns of Ripley and Alfreton and is the Gateway to the Peak District National Park. Swanwick is in the Borough of Amber Valley.

Swanwick is conveniently situated near the A38 and just a few miles west of Junction 28 of the M1. The village also provides easy access to Derby, Nottingham, Chesterfield, Mansfield and Sheffield. It is predominantly a commuter village but has a large employer on its extreme north edge after Thorntons moved here from Belper.

Although an old village, Swanwick can be divided into two main areas, the oldest parts of the village being found in the centre and west with the newer, essentially residential areas to the north and east. Several of the estates were developed in the 1960s, 70s and 80s. Swanwick doubled its size to around 5000 during the 20th century and this despite the fact that it has lost much of its original industries.

There are three schools: Swanwick School and Sports College (formerly the Delves School), Swanwick Primary School, and Swanwick Hall School, an 11-18 community school with a sixth form. In addition there is a pre-school group that is housed in an old chapel in Pentrich Road, and there are several other play and toddler groups within the village.

All the three churches in the village, Anglican, Methodist and Baptist, are now united under the title of Christians in Swanwick. Within the village there is a range of shops and services which include: mini-market, newsagent, Chinese take-away, pharmacy, off licences, post office, three hairdressers, fancy dress shop, dog grooming, car repairs, two filling stations, a conference centre, butcher’s shop, driving school, café, charity shop and two dental practices.

Swanwick has an allotment association. The alotments are situated in an area between The Delves and Broadway with access from Shirley Road. There are forty-nine allotments on the site. The land is owned by the Parish Council to whom an annual rent is paid. The association has been in existence for over seventy years and every year a wide variety of produce is grown. In recent years there has been a rise in the popularity of growing good quality uncontaminated vegetables and fruit. This is reflected in the fact that all plots are currently occupied, and there is a waiting list.